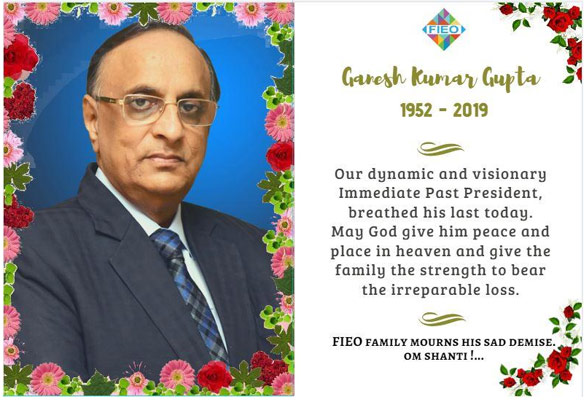 Federation of Indian Export Organisations (FIEO) mourns the sad demise of its dynamic and visionary Immediate Past President, Ganesh Kumar Gupta, who was unwell and breathed his last (August 30, 2019). Born on December 9, 1952 in the holy city of Kashi (Varanasi), Ganesh Kumar Gupta, besides being Regional Chairman (WR) and Vice-President FIEO was twice the President of the Federation between 2007-2009 and 2016-2018. He was also Chairman SRTEPC, Silk EPC and the Textile Committee and held various key positions in several other important organisations. Gupta was associated with the textile industry for about 4 decades and played a pivotal role in the overall growth and development of the industry. He was also the Chairman of Akash Textiles Exports Pvt. Ltd. and Vijay Silk House Group having its centers at Mumbai, Surat, Bengaluru, Delhi and Varanasi.

Well known for his dedication, zeal, commitment, hard work and enthusiasm; Gupta gave almost 20 years of his precious life to FIEO serving the Federation at different top positions in the organisation with which he brought FIEO to such a high platform both on international as well as domestic front. He not only led FIEO but also led several other key trade and industry organisations including SRTEPC which conferred on him the SRTEPC Lifetime Achievement Award. His charismatic leadership qualities has further helped in bringing FIEO to such a stage where it is recognised as the most important voice of India’s exports sector. Ganesh Kumar Gupta always appreciated the good work of both the Central and the State Governments and constantly and regularly used to deliberate with them and other key stakeholders in trade and industry so as to further give boost to India’s commerce and trade especially exports.

Some of his major key achievements as President FIEO includes 2 percent increase in MEIS rates for labour-intensive sectors of exports, online submission of LUT at the GST portal, FIEO & Paypal MoU to empower small & medium businesses to sell across the globe, launch of fieo.globallinker.com for MSMEs to facilitate and promote their businesses, 3 Special refund fortnight clearance drive including setting of Help desks at FIEO offices for expeditious IGST refunds, launch of Niryat Mitra – Mobile App promoting India’s international trade and MoUs with both BSE and NSE for hedging currency risks, raise equity capital services etc. to FIEO members.

Besides his other important initiatives also led to the increase in interest equalisation for MSME manufacturers from 3 percent to 5 percent, grant of lead agency status to FIEO for India Pavilion during 1st China International Import Expo (CIIE) in Shanghai, organising of 1st Edition of Logix India 2019, JV with eBay for promoting retail exports and launch of Women Exporter e-Group on FIEOGlobalLinker to celebrate achievements of women entrepreneurs. Further under his leadership and guidance well over 300 GST related seminar/open houses/interactive session were held to help the exporting community, led several key delegation across different countries of the world promoting India’s exports & creating brand India across the globe, relaxation in caution listing of exporters, Apex court’s decision on Target Plus Scheme and extension of Duty Drawback were brought to its final conclusion. 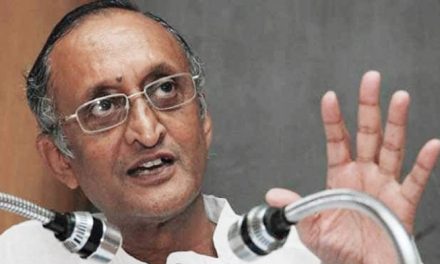 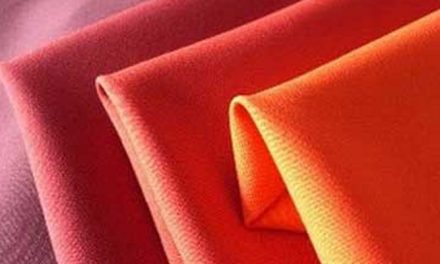 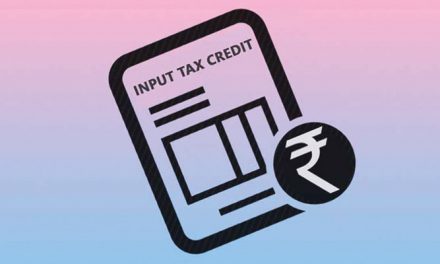 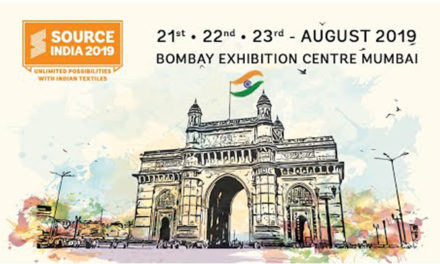 4th edition of Source India 2019 to be held in Mumbai